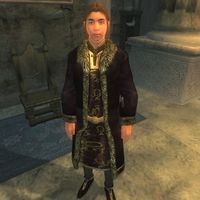 Laythe Wavrick is an Imperial Chief Steward and Attendant to Countess Arriana Valga of Chorrol. During the quest, Canvas the Castle, the player needs to investigate Laythe as a suspect. It turns out he is a loyal steward.

Laythe wears a black & burgundy outfit with a pair of gold trimmed shoes. He is armed with a steel shortsword and carries the key to the private area of Chorrol Castle with a large amount of gold.

Laythe Wavrick begins his day at 6am after a short rest. After waking he will wander around his bedroom in Castle Chorrol Private Quarters until 8am. At 8am he will head to his post in Castle Chorrol Great Hall to help his Countess while court is in attendance. He will remain at his post next to the throne until 10pm, at which time he will return to his quarters to have a late meal. After spending two hours enjoying his meal Laythe Wavrick will wander around his quarters until 1am, at which time he will finally go to bed for five hours. After waking he will repeat his schedule.

Speaking to Laythe Wavrick for the first time will have him greet you by telling you his name, and title "Hello. I am Laythe Wavrick, the Chief Herald and Countess Valga's attendant. Welcome to Chorrol."

If you ask him about the stolen Honorblade of Chorrol Laythe Warvick will say the following, "Many years ago, when the Count was still alive, a daring thief stole the ancient Honorblade of Chorrol from out of this castle. Why?" If you return to him the missing blade he will elatedly accept the blade, "This is incredible! I never thought to see this sword again! How did you ... never mind, one should not look a gift horse in the mouth. Please accept my thanks on behalf of the people of Chorrol, for restoring this sword and the honor of our city. As a token of our gratitude, I bestow upon you a symbol of honor and heroism, the Escutcheon of Chorrol. You've done a great service to Chorrol, and you should be proud." If you instead decide against returning the missing sword, by not informing him of your recovery of the artifact, he will be annoyed by you wasting his time, and end the conversation by saying; "Well then, you must excuse me. I have important business to attend to."

Questioning the Steward as part of the quest, Canvas the Castle will have him reply; "My duties rely on watching no more than the throne and attending to visitors. But confidentially, I will say that Orgnolf has been acting a bit unusal [sic]. His abuse of drink has gotten worse lately. He has taken to asking for money from others to purchase spirits. A porter's wage does not befit his habit."