If you talk to Countess Arriana Valga in Castle Chorrol she will claim to be in the middle of an investigation. If her disposition is 50 or better she will ask you to help, otherwise she will brush you off.

Someone has stolen a sentimental painting of the Countess' husband, Charrus Valga, who was killed in battle. The painting hung in her bedchamber, and the only two people left as suspects are the court mage and the porter. She will also give you the names of three other people to speak to, who may help solve the case. She will also warn you that she will be very cross if you accuse the wrong person.

None of the witnesses will talk to you about the investigation until you raise their disposition enough. The Countess was good enough to give the general locations of the five people you need to track down, as well as some keys and permission to enter the castle's restricted sections:

The easiest person to find is Laythe, standing by the throne in the great hall, so you should get him out of the way. He will tell you that he stays near the throne and deals with visitors, but didn't see anything. He will mention that Orgnolf has a drinking problem, and has taken to borrowing money from others to feed his habit.

Next you should talk to Orok. From 10am until midday he can be found alternating between the great hall and the private quarters, then he leaves for Northern Goods and Trade. He returns at 2pm and will wander around the private quarters until he goes to sleep. Orok will tell you that it was raining quite heavily that evening, so he didn't go for his usual walk. However, he did not see either Chanel or Orgnolf, mostly because he stayed in his quarters. Lastly he will mention that he caught Orgnolf drinking in the west tower once.

Now you should track down Bittneld before moving on to the suspects. Bittneld can be a bit tricky to find if he is on patrol, but from midnight until 10am he is either in the castle barracks or standing in the main hall of the castle. Bittneld reveals that he too saw nothing, as he was out patrolling. However, he noticed Chanel spending a lot of time in the West Tower, which he questioned her about and received a somewhat satisfactory answer (she claimed she was researching her spells).

So far there has not been much witnessing by the witnesses, so it's time to interview the suspects. As two people have mentioned Orgnolf being a drunk, he should be easier to crack, so we'll start there. Orgnolf won't be hard to find as he's restricted to his quarters. Asking him about the night in question will have him claim that he was arguing with a delivery boy in the great hall who had had an accident in the rain, then retired to his room.

Then find Chanel in her quarters. She will claim to have spent the evening taking star readings in the courtyard, went to the dining area for a while after that, and then went to bed. Do not accuse anyone yet, for without evidence you cannot back up your claim.

Both stories have holes, but you need evidence. The first thing to do is retrace the suspects movements to see if you can spot anything. There is nothing to be found along Orgnolf's route, but along Chanel's route there are some suspicious footprints in the dining room. Next thing is to investigate the west tower that seems to be heavily used by both suspects. If you follow Orok's testimony and search the upper rooms you can find Orgnolf's drinking den. However, if you go to the lower area and search around you should be able to find a painting. The evidence seems to be stacking up against Chanel, so you should pay another visit to her room. If you investigate the oddly placed lectern and chairs, you will uncover some painting tools.

Now it's time to make an accusation. Finding all the evidence does not remove the choice of accusing either suspect. However, be sure to only accuse the guilty party or your reward from the Countess will be reduced.

The evidence against Orgnolf is lackluster at best. He is a drunk desperate for money, and his supposed argument with a delivery boy was not witnessed by Laythe. That said you can still accuse him, but he will not confess and be indignant about the accusation.

The evidence against Chanel on the other hand is quite substantial. She claimed to be star reading on a night two others say was raining, the spilled paint and footprints in the dining room, and the painting tools in her lectern. There is also the more circumstantial painting in the west tower where she spends a lot of time. When you accuse her (with a disposition less than 70) she will almost confess, but will not speak fully until she trusts you more. After you raise her disposition she will make a full confession. She will claim she only took it due to her love of the Count, and jealousy of the time the Countess spent with the painting. She will also reveal the location of the painting.

Restoration or a Clean SlateEdit 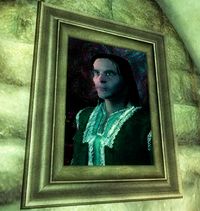 The missing portrait of Charus Valga, back in its rightful place. See bugs.