Jakben Imbel's House is a large manor in the Imperial City Talos Plaza District found in the main plaza between The Tiber Septim Hotel and Umbacano Manor (quest-related). 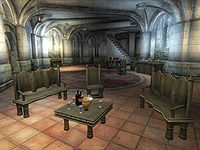 The ground floor is absolutely spotless with ceramic pottery and silverware methodically lined up on various tables. As is custom with Imperial City mansions, there are two entrances to the private quarters and two Average locked entrances to the basement. A desk placed in the center of the room holds clutter. Near the eastern staircase, a small table holds a sweetcake with a bottle of cheap wine on the side. Two barrels near the foot of the stairs contain clutter. In the western side of the room, on another small table, sits a bowl with nine blackberries and two additional bottles of cheap wine. The cupboard and the two barrels all hold clutter. Jakben's manservant, Gemellus Axius, can be found here in the afternoon. 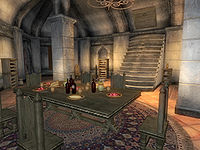 Entering the private quarters from the eastern staircase lands you near Gemellus' Easy locked room, which is filled to the brim with wine: four bottles of cheap wine, three bottles of Surilie Brothers Wine, three bottles of Tamika's West Weald Wine, and one bottle of Surilie Brothers Vintage 415. The set of drawers near the door contains clutter and has three apples sitting on top. The two barrels and the chest at the foot of the bed contain clutter while the small table holds another apple and a copy of Beggar Prince. A food cupboard near the door has a Hard locked jewelry box hidden on top, which has a chance of containing coins or a silver nugget. The neighboring room is Average locked and contains a desk and another set of drawers, both with clutter, while the unlocked chest contains silverware and/or gold. The small book collection includes copies of Thief of Virtue and all five volumes of The Real Barenziah.

The dining area is located in the center of the quarters with a set of stairs leading to Jakben's study. When entering from Gemellus' quarters, two chests near the door hold clutter while the large dining table seats six and has plenty of food on display: five ears of corn, seven pieces of venison, and eleven radishes, as well as two bottles of cheap wine. The two wine racks combined hold an impressive thirty-three bottles. A grain sack can be found near one of the racks and two cheese wedges sit on the small table near the western door. A human skull near the Hard locked trapdoor leading up to the study ties the room together with a macabre touch. 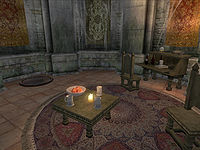 The study (another area labeled as Jakben Imbel's Private Quarters in-game) is a cramped, circular room with tapestries and spider webs covering the walls. On a small table sits a silver bowl with three apples. Jakben's Hard locked desk has a copy of The Book of Daedra and three bottles of Tamika's West Weald Wine on top, as well as a Hard locked jewelry box with a chance of holding enchanted jewelry or a potion inside. When you reach stage 20 of the related quest, the desk will contain the Imbel Genealogy. 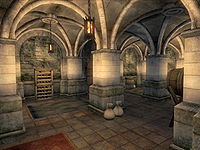 The basement area, at least on the surface, appears innocent: a typical basement used for storage. However, it hides the locked entrance to the catacombs, unlockable with the Imbel Family Crypt Key. When entering the basement from the western door, the first room contains four barrels, four crates, three sacks, and two chests, all with clutter, as well as two open food sacks. An Average locked door leads to the central area of the basement which contains eight clutter sacks and a single clutter chest, while two cupboards and a chest of drawers contain upper-class clothing. Even more clutter can be found through the other Average locked door to the east with five sacks, one barrel, and one chest. A most impressive wine collection can also be found with a whopping fifty bottles of Tamika's West Weald Wine. 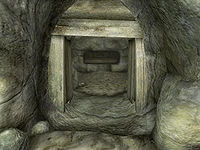 For such a small cave, the tomb certainly has its share of enemies. Coming through the door will place you in a cavern containing one coffin, with a 50% chance of an enemy on the opposite side of the room. To the left is a small side passage, leading to a room containing up to two enemies. Behind a Hard locked door is an area containing two coffins and a healing chest, possibly being guarded by a vampire. An unlocked door leads to a dead end and two treasure chests.

Going back to the main cavern and continuing down into the southern passageway will bring you down a twisting cave into an open space containing one guaranteed vampire, and a 50% chance of another enemy. At the end of this room is another coffin. Backtracking up to the main cavern again and this time turning right down the eastern passage will bring you to a junction. One way is blocked by rocks, but has a healing chest at the end of it. Another is blocked by an Average locked door. Going through this door will bring you face-to-face with a vampire boss and perhaps an undead servant. Once you've dealt with them, unlock the next door and proceed into the final room. Inside will be Springheel Jak's Coffin, which contains the Diary of Springheel Jak. Opening it will not reveal the boots you've come to steal, but it will cause Jakben to appear inside the cave and attack.