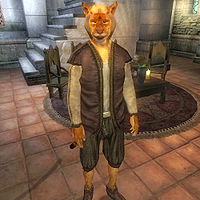 J'mhad is a Khajiit healer living in the Imperial City's Temple District. He is the groundskeeper of the Temple of the One.

He has pretty much dedicated his whole existence to the maintenance of the Temple and lives conveniently close to his workplace. He wakes up early every day at 4am and immediately heads to the Temple and spends all morning inside. At noon, he heads home for a two-hour breakfast before returning to the Temple at 2pm. After another six hours, he goes back home and wanders around for two hours before going to bed at 10pm. During Light the Dragonfires, when the whole city is under martial law, J'mhad wisely stays away from the Temple and locks himself up inside his house.

J'mhad wears a mixture of lower- and middle-class clothing which includes some breeches, a brown shirt, and a pair of thick cowhide shoes. He also carries a small amount of gold. Due to the fact that he is a healer, J'mhad can cast major Alteration, Destruction, Illusion, and Restoration spells. Additionally, he can cast minor Conjuration spells, but these do not include Bound Armor.

When you approach him for the first time, you will get a typical Khajiit greeting: "J'mhad keeps the grounds of the Temple nice and neat. Other things, J'mhad does, when they ask." Even though he never breaks off his regular schedule, he still expresses desire to visit other locations in the Imperial City: "The Arboretum. That's where J'mhad likes to go. Always quiet, always green."