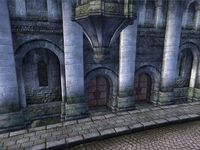 J'mhad's House is located in the eastern part of the Imperial City's Temple District. The house is situated next to Roland Jenseric's house and across the street from Ruslan's house.

It is the residence of the Temple of the One's groundskeeper, J'mhad, and consists of three zones, J'mhad's House, J'mhad's Private Quarters, and J'mhad's Basement. 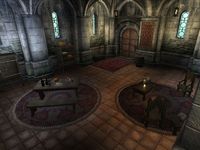 The ground floor of the house

Upon entering, you will find yourself in a typical Imperial City home. To your immediate right is a locked chest containing clutter and to your left is a barrel holding some more clutter. South of the chest is a cabinet containing a pumpkin, two potatoes, some venison, two ears of corn, three tomatoes, and a selection of tan dishes. Southeast of this cabinet is a dining table holding two cheese wedges, two apples, a potato, a carrot, a sweetcake, a bottle of cheap wine, a bottle of Surilie Brothers Wine, and a selection of clay dishes. In the southwest corner of the room, behind the table, is a watermelon in between a food cupboard and a small table holding two bottles of mead, a bottle of cheap wine, a bottle of Surilie Brothers Wine, and a few clay goblets placed on a metal plate. Northeast of the dining table in the center of the room are three chairs angled toward a small table holding a pewter pot and a planter. Two benches can be found north of this table. Upstairs, near the door to the private quarters, is a barrel and a sack that both contain clutter. 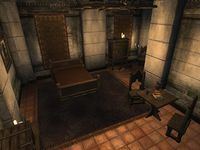 The master bedroom located in the private quarters

The private quarters consist of two bedrooms and a small hallway. The hallway contains two chairs and a small table holding a planter and some middle-class dishes. The eastern room in the private quarters is the larger room of the two and serves as J'mhad's master bedroom. Upon entering, a chest with a chance of containing some gold, pelts and silverware can be found to your immediate left. To your right are two chairs and a table holding two carrots, a potato, a cheese wedge, and a selection of clay and pewter dishes. A double size bed can be found in the north part of the room. East of the bed are two cupboards and a chair. The cupboard with a brown shirt and a pair of doeskin shoes placed on the ground near it contains a selection of clothing while the other cupboard contains clutter.

The other room in the private quarters is smaller and serves as a spare bedroom. Throughout the room, a variety of paintings can be found being displayed on the walls. As soon as you enter the room, a set of drawers containing clutter can be found to your right and two barrels containing some more clutter can be found to your left. Beside the drawers is an unlocked chest that holds up to three pieces of randomly selected equipment. A single size bed and a cupboard containing clutter are north of this chest. In the northern corner of the room is a chair and a small table that holds two carrots, a potato, a cheese wedge, and some pewter and clay dishes. 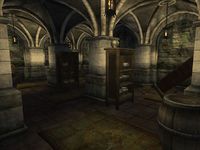 The basement of the house

The basement of the house is used by J'mhad to store a variety of unremarkable clutter. Shortly after entering, you will find a locked chest and a barrel that both contain clutter on the landing halfway down the steps. After heading down the rest of the steps and reaching the main part of the basement, you will find a sack containing clutter to your immediate right. West of this sack is a barrel containing more clutter with two pewter pots placed beside it. A cabinet displaying a selection of pewter dishes can be found in the vicinity of this barrel. Some turned over furniture can be found in the northwest corner of the basement. South of this furniture are two empty cabinets along with a cabinet containing some stone and tan items east of the empty cabinets. To the east of this cabinet is a sack and a barrel that both contain clutter. Two chairs are located in the southeast corner of the basement. In the southwest corner of the room, you will find two barrels and a crate that all contain more clutter.