Locating the Shrine of HircineEdit

Hircine's Shrine is located in the Great Forest, south of the Imperial City.

The location of this shrine can be marked on your map by:

At the shrine, speak to Vajhira, and say you are a hunter. Telling her that you are prey will not have any repercussions, you may just speak to her again and say you are a hunter. She tells you to make an offer of a Bear or Wolf Pelt to the shrine. You also need to be level 17 to make the offer. Just search in any direction from the shrine for a Wolf (easy) or a Bear. Once you have a pelt, return to the shrine. Hircine will tell you to bring him the horn of the only Unicorn in Cyrodiil. His dialogue is:

Summoned by prey. The hare crouches before the fox's muzzle. Perhaps I shall task you, mortal. Set you to hunt for my amusement. In Harcane Grove is a quarry worthy of the chase. First named, last tamed, the unicorn runs wild there. Bring me this creature's horn, mortal. If you dare. 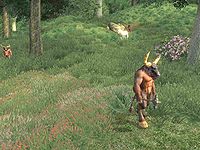 The Unicorn is in Harcane Grove to the south-southeast of the shrine. There are three leveled Minotaurs of the Grove guarding the Unicorn.

You do not have to kill the minotaurs. However, killing the minotaurs one at a time out of sight of the Unicorn makes it easier to complete the quest.

The Unicorn can be a challenging fight, because it has a strong attack, multiple resistances, and Reflect Damage abilities (details are at the Unicorn article). As soon as you unsheathe your weapon (or raise your fists) it will automatically attack you. Some options for killing the unicorn (including some options that do not require actually killing it yourself) include:

Once you have the Unicorn Horn, take it back to the shrine to receive the Saviour's Hide, a light armor chestpiece with a 25% Resist Magic enchantment. Hircine will say:

Yes, hunter, make your offering. Did you taste its flesh and drink its blood? Never waste the spoils of a kill. You've pleased me, hunter. Take my token, and wear it well. Hereafter, take your prey, and whisper my name.