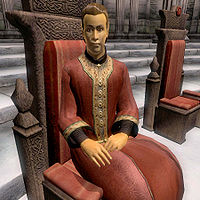 High Chancellor Ocato is a High Elf battlemage and a leading member of the Elder Council. He is currently the de-facto ruler of Cyrodiil in the absence of an Emperor. Whether or not he is actually an effective ruler is a subject of debate, as he seems more concerned with protecting interests in other provinces than taking action against the forces of Oblivion amassing on his doorstep. While several of the Counts (and countesses) applaud his efforts in holding the Empire together, others feel he is merely using the crisis as a means of securing more power for himself. For more information, see the Lore article.

High Chancellor Ocato wears a set of red silk robes and a pair of gold trimmed shoes. He is armed with the Staff of the Battlemage and carries the Imperial Palace key and a large amount of gold. Ocato knows the standard leveled Battlemage spells.

Except during the two quests Allies for Bruma and Light the Dragonfires, the Chancellor spends nearly all his time sitting in his throne in the Imperial City Palace's Elder Council Chambers. At 8pm every day, he heads to the door to the Chambers, but promptly returns to his seat not long after his arrival.

During the quest Allies for Bruma, he will stand outside the door to the Elder Council Chambers, but once the player is in any part of the Palace, he will move for his own chambers, waiting there until the player has left again. Once the player has spoken to him about obtaining help for Bruma from the Imperial Legion, he resumes his normal schedule.

During the quest Light the Dragonfires, Ocato's schedule is largely dictated by the quest. Once the quest has been started, he will wait standing in the Elder Council Chambers, initiating dialogue with player as the player approaches him with Martin. When Mehrunes Dagon begins to attack the city, he will stick with Martin until they reach the Temple of the One. While Martin is inside shattering the Amulet of Kings, he will wait outside the doors to the Temple. After Dagon is banished, he will follow the player around as long as he is in the Temple of the One, but otherwise will resume his usual schedule.

Attempting to speak to High Chancellor Ocato when not on official business for the Empire will have him be disgruntled by the disturbance, this is displayed by his greeting:

"Excuse me, the Empire doesn't run itself, you know. Submit a complaint to the usual department and I'm sure someone will take care of it. Please excuse me. I have things to attend to."

If you ask him about the Elder Council during an occasion where he will agree to parley with you he will say the following if the Oblivion Crisis is still a threat to the Empire:

Elder Council
"Don't worry. The Elder Council can govern the Empire perfectly well until a new heir can be found. Truth be told, most of the Council has returned to the provinces to deal with urgent local matters, but we are in regular communication. But the Inner Council still holds regular meetings. We have the situation well in hand, I assure you."

After the crisis has been dealt with he will be more sincere of the troubles facing the Empire:

Elder Council
"We are now the stewards of the Empire. We can hold the Empire together in the short term. But to be honest, I don't know what will happen. The provinces have been restive for years, even before the latest crisis. With no legitimate claimant for the Dragon Throne... troubled times lie ahead."

After Light the Dragonfires his greeting will change to:

"Hail, Champion!"
"Is there something you need, Champion?"

He now bids farewell with:

If you speak with him after the Blades send you to meet with him as part of the quest Allies for Bruma, he will be surprised by your status as a servant of the Empire:

"From the Blades, did you say? Jauffre sent you? What's this about? Quickly, now."
Aid for Bruma
"This is terrible news. Under normal circumstances, I would dispatch a legion or two to Bruma immediately. But the circumstances are not normal, are they? I've been pleading for troops for Cyrodiil for weeks, but the generals assure me that the entire Imperial Army is already fully committed. Besides... I'd have a full-scale political crisis on my hands if I tried to pull any troops out of the provinces. I'm sorry, but the cities of Cyrodiil will have to fend for themselves for the time being."

Once you have reclaimed the Amulet of Kings from Mankar Camoran, and are thus able to prove Martin Septim's claim to the dragon throne he will greet you in the following manner if Martin is not with you after you have arrived with Martin at the Imperial Palace.

"Where is Martin? I was told that he had arrived in the capital."

After which he will end the conversation, being anxious to meet his Emperor. Before Martin has entered the palace, if you enter first Ocato may say to the player:

"Everything is ready for Martin's arrival, don't worry."'

' Once you have arrived with Martin in tow he will greet you with the following:

"I have been expecting you. The full Council has already considered the matter of Martin's claim to the Imperial Throne in detail."

After which he will begin to proclaim Martin as Emperor:

Ocato: "Martin Septim, on behalf of the Elder Council, I accept your claim to the Imperial Throne. We should arrange the coronation ceremony as soon as ..."
Imperial Legion Messenger: "Chancellor Ocato! Chancellor Ocato! Chancellor Ocato! The city is under attack! Oblivion Gates have opened, and daedra are inside the walls! The guard is overwhelmed!"
Ocato: "Courage, soldier. We have an Emperor again. Your Highness, what are your orders? Shall the Guard fall back to the Palace?"
Martin Septim: "No. If we let ourselves get besieged in the Palace we're doomed. We must get to the Temple of the One immediately."
Ocato: "As you command, sire. Guards! Form up and protect the Emperor! To the Temple of the One!"

Then he will help escort him to the Temple of the One in the Temple District. Speaking to him will have him defer leadership to Martin:

"I am at the Emperor Martin's command."

After Martin sacrifices himself to end the Oblivion Crisis, Chancellor Ocato will greet the player in the ruins of the Temple of the One, under the statue where the Avatar of Akatosh was, yet unaware of what transpired:

"What happened? Where's Martin? I must congratulate him! Mehrunes Dagon is defeated! Cast back into Oblivion! We've won!"
Martin is gone.
"What do you mean, gone? We saw the Temple dome explode, the avatar of Akatosh appear... that was Martin?"
Yes. He shattered the Amulet...
"The joined blood of kings and gods. The Amulet of Kings. The divine power of Akatosh."
...and Martin's blood, too...
"Then Martin is gone..."
But the gates are sealed.
"Yes. Sealed forever. Mehrunes Dagon and his ilk can never threaten Tamriel again. Martin is dead. But he died an emperor, and a hero to rival Tiber Septim."
What about the Empire?
"This victory is not without cost. We've lost Martin Septim. What an emperor he might have made. His sacrifice was necessary, but it leaves the Empire without an emperor. I don't know what happens now. There are troubled times ahead for the Empire. But now is not the time to worry about the future. Let's just give thanks that we're alive."

Ending the conversation with Ocato that happens immediately after Martin's sacrifice:

"The dragon will stand forever as a memorial to what you and Martin did for all of Tamriel."

After this discussion, you may ask him about becoming The Champion of Cyrodiil:

Martin
"I know he's gone. As the Chancellor of the Elder Council, my concern now is how to choose his successor."

Champion of Cyrodiil
"You have earned the highest rank possible in the Order of the Dragon, the illustrious order of Imperial knights founded by Tiber Septim himself. It is a high honor. Only six other Champions have been awarded in the history of the Empire."

The other members of the nobility that rule Cyrodiil have some wildly different opinions of Ocato and his efforts to maintain the Empire without an Emperor:

The Gray Fox will also mention Ocato during the quest The Ultimate Heist when asked about the location of the Old Way: