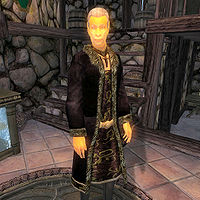 Falcar in the Cheydinhal Guildhall 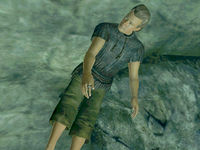 Falcar is the Altmer head of the Cheydinhal Mages Guild chapter. However, he is secretly still practicing necromancy, despite Hannibal Traven's ban on necromancy within the guild. Your actions during the Cheydinhal Recommendation quest reveal his secret, at which point he flees from Cheydinhal, in the process renouncing his Mages Guild affiliation and instead joining the Necromancers Cult. You encounter him again at Silorn with his necromancer allies during the Ambush quest.

Before the Recommendation quest, he can be found at the Cheydinhal Mages Guild Hall, where he sleeps in his locked chambers in the basement between 10pm and 6am. After waking up, he heads upstairs and spends the morning wandering around on the ground floor. At 1pm, he heads back down into the basement and spends most of the afternoon there. He returns to the ground floor at 6pm for another two hours of wandering. At 8pm, he finally heads to the basement, where he will sleepily stroll around for another two hours before heading to bed at 10pm. At stage 30 of the recommendation quest (when you find the ring of burden), he is disabled and therefore can no longer be found anywhere in the game.

Only when you start the Ambush quest is he re-enabled, after becoming non-essential and being moved to a location outside Silorn. During the ensuing combat he typically flees inside the ruins to a room in the third level, where he waits to confront you with some taunting: Is this the best your pathetic guild could do? If so, our work will be easier than I suspected. And to think, Traven has sent you to defeat us? Following which he attacks you, of course.

He wears an upper-class black & burgundy outfit with gold trimmed shoes and carries a leveled amount of gold and his key. When he joins the necromancers, he starts carrying a colossal black soul gem and a leveled enchanted dagger of the best possible quality. In accordance with his necromantic affiliation, he will be able to cast a set of leveled necromancer spells.

If you approach him before having joined the Guild he will say: "Did you want something? You're not here to join the Mages Guild, are you?" When you ask about joining the Mages Guild he will taunt you: "Are you sure you're up to it? You seem a little... slow." If you are having second thoughts, he will comment: "Hrmph. Not much of a loss, if you ask me." If you insist on joining the guild, he will tell you how little he thinks of you: "I expect this will end in disaster, but nonetheless, I will grant your request. Very well... you are now an Associate of the Mages Guild. To advance in the guild, you'll need recommendations from each local guild hall in Cyrodiil. A feat which I'm sure will elude you completely. If you manage to actually receive the recommendations, you'll be eligible for entrance to the Arcane University. I shall be quite surprised, as well. Now unless you wish to attempt to impress me with your no doubt staggering intellect, I have actual work to attend to." And he will continue to be patronizing, if you ask him about the Arcane University: "Without recommendations from the local guildhalls, you'll never see the inside of it. I dare say that's one of the few things Traven has done right. By all means, travel to the Imperial City and get stopped at the gates. You should get used to that sort of rejection." If you ask him about Cheydinhal, he will finally introduce himself: "I am the chapter head of the Cheydinhal Mages Guild. It is quite an honor... but they had no choice, since I'm the only semi-competent one here." On the Guild and its problems, he has the following observations: "The guild is still powerful in Cyrodiil, but poor decisions in the recent past have weakened it. Perhaps killed it. We shall see." 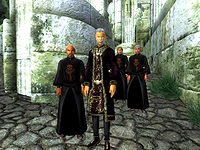 When approached about a recommendation, the patronizing guild leader will make sure you are up to the task: "Don't waste my time if you're not ready for this. Are you prepared to do what is necessary to gain a recommendation from me?" If you say 'no' he will reply: "Just as I suspected. If you ever believe yourself to be ready, perhaps we'll have reason to speak." If you say 'yes' he will say: "Hrmph. Very well. We shall see how prepared you actually are. There was a particular ring of Burden I was testing some time ago. Another stupid Associate somehow got his hands on it, and managed to misplace it. If I didn't know better, I'd say he purposely tossed it down the well behind the guild hall. Why he would do such a thing is beyond me. You will retrieve this ring for me. Should you manage to do so, I shall consider sending a recommendation to the University. The well is locked, so you'll need the key. Deetsan should have a copy of it. Now get moving." Asking him about a recommendation at this point will net you: "I believe I explained your task very clearly. Find the ring, which is somewhere down in the well behind the guild hall. Bring it to me. Do you understand, or do I need to use even smaller words?" On the Ring of Burden a mysterious Falcar will inform you: "It's not a normal ring, you see. You may find it slightly difficult to carry. Don't say I didn't warn you."

Talking to Deetsan will result in the following unsettling answer: "Don't tell me Falcar's given you the same task he gave Vidkun! Oh, dear. I'd say more, but... well, Falcar is the ranking member here, and I don't feel comfortable talking about him. I'm sorry. I'll tell you what. Find me when Falcar's not around, and then we'll talk. After we've spoken, you can have the key. Believe me, this is important." When approached later on, with Falcar out of sight, Deetsan will tell you: "We can talk, so long as Falcar is out of earshot. If I didn't know any better, I'd say he's trying to get you killed! He gave poor Vidkun the same task, and we never saw him again. I'm reasonably sure there's a connection, but I can't prove it. Do be careful. I'd hate to lose another useful Associate. Here's the key, and something extra. I don't know if it will be of use to you, but from what I've heard of Falcar's ring, it may come in handy. And if you find out anything about what happened to Vidkun, let me know, will you?"

Once you have discovered the corpse of Vidkun and you have claimed the ring, Falcar will be gone from the guildhall. Deetsan, however, will fill you in: "I'm afraid some things have happened while you've been gone, Associate. It may affect your recommendation. I'll admit, it's my doing. I couldn't leave well enough alone, and after you'd left to go after that ring, well... I'm just so tired of the way we've all been treated by Falcar! I was worried about you, and angry about Vidkun, so I confronted Falcar directly. He was furious when I told him I'd helped you, and then when I threatened to report him to the Council of Mages, I thought he was going to kill me! He flew into a rage! I didn't even understand some of his ranting, but he said that our days are numbered, and then he stormed out! I don't know if he ever wrote your recommendation. I'm sorry. I didn't expect this to happen. Perhaps you should go look and see if he did write one? You should check his room in the living quarters. If you see the note, or anything else unusual, let me know. I'll gladly send it to the Council." After you have found Black Soul Gems in Falcar's quarters, Deetsan will write you the recommendation herself.

During the Ambush quest, if you speak to him he will say the following: "What's this? Is this the best your pathetic guild could do? If so, our work will be easier than I suspected. And to think, Traven has sent you to defeat us? I should've killed you outright when I had the chance. Well, life is all about second chances, isn't it? I won't waste this one."