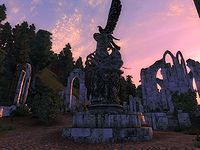 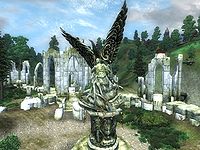 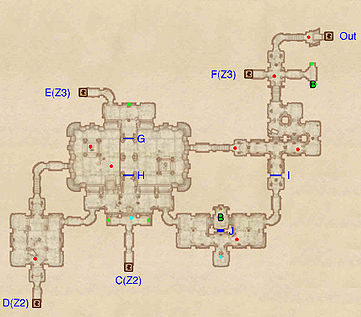 Immediately upon entering, you will encounter two Necromancers patrolling the first area, so be prepared. Follow the path until you reach an intersection. The iron gate to the south (I) is locked, but provides quick access to the boss-leveled Ayleid Coffer at B, opened by the nearby push button (cyan dot on map); alternatively, the Coffer can be reached from the big central room, but taking this route will net you a battle against two Necromancers on the lower floor. Regardless of your choice, and because the push button raising the gates at H and G are inaccessible, locate one of the two tunnels leading to the southwestern room and exit through door D, leading to Silorn Sedorseli.

When you return from Silorn Sedorseli through door C. On the elevated balcony, activate the push button (cyan dot on map) which will remove the iron gates blocking the bridge below. Remember to loot the balcony's Ayleid Cask and Chest then jump down, claim the four Welkynd Stones from the pedestals and cross the unguarded bridge leading to door E, Silorn Buroseli.

When you emerge from Silorn Buroseli from door F, you will be on a path right over the very first area of Silorn; cross the bridge and pry open the boss-leveled chest at B and examine the minor loot chest for additional goods. Finally, jump off the bridge and go the short distance to door Out, leading outside.

With an acrobatics skill of around 40, it is possible to jump around the gates at G and H and access Silorn Buroseli without going through Silorn Sedorseli. 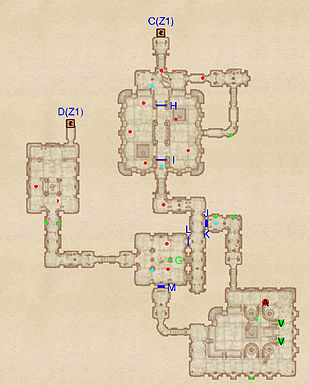 Your main objective in this zone is reaching door C back to an inaccessible area in the first zone. A hefty amount of treasure makes it worthwhile exploring a bit further, so proceed through the first room and loot the Ayleid Cask and chest in the next hallway (green dots on map). Two Necromancers awaits in the next big room, as well as the zone's four Welkynd Stones. Locate the push block (cyan dot on map) on the southern pillar, watch the wall at M disappear and head down into the southeastern room, which is rather big with a big pool of water in the middle. The pool contains nothing but a restoration chest, so stay ashore for now, fight the boss-leveled Necromancer (A) and claim the two Varla Stones at V. Take the northern tunnel and step on the pad, which will lower the two walls at J and K. Head down the stairs, only to emerge in another water-filled room; the water contains nothing but slaughterfish and an underwater tunnel which contains a minor loot chest, so either take the tunnel or step on the pad which will lower the gates at I and H. Finally, head north and return to Silorn through door C. 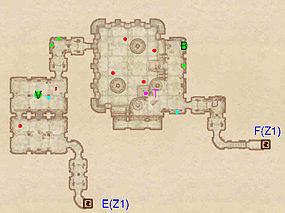 Upon entering from door E, dispose of the Necromancer in the first room, then locate the push button (cyan dot on map) in the second room and claim the Varla Stone from the pedestal at V. If you let him flee during the Ambush quest, Falcar will be in the next hallway, right near an Ayleid Cask and chest; dispose of him and claim the Colossal Black Soul Gem from his corpse and proceed forward. The final room is big and is guarded by four Undead and an unfriendly Dark Welkynd Stone trap at T. Run past the enemies and up the stairs, then hit the push button on the southern wall (cyan dot on map) which will deactivate the trap. Claim the goods from the boss-leveled Ayleid Reliquary at B and make your way to door F, leading back to the first zone, Silorn.