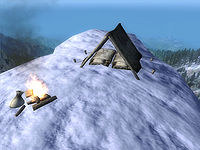 Dive Rock is a mountain northeast of Cheydinhal (quest-related). It is home to a simple campsite and, on a clear day, one of the most spectacular views in the province.

The View from Dive Rock

The site consists of a tent with two lower-class beds, a campfire, and a sack. The sack always contains the following items: an inkwell, a quill, a wolf pelt, two repair hammers, three bottles of mead, five iron arrows, five pieces of venison, and 23 gold. Also next to the campfire is Agnar's Journal.

Dive Rock is high in the mountains and does not have any road leading to it, making access tricky. From the closest location, Aerin's Camp, the direct route is northeast, straight up a steep cliff face. Even on a horse, the direct climb is slow and arduous.

The recommended route by foot is to head to Aerin's Camp using the unmarked road that leads there from Cheydinhal. Continue southeast from Aerin's Camp across the cliff face until some trees begin to appear on the mountainside. It is possible to climb in this "valley" by roughly following the line of the trees. When the trees peter out, there are two options:

If you follow the ridge just above Dive Rock, you can go to the map edge and look at a beautiful valley in Skyrim, which, given the geographical location of Dive Rock, is certainly in the Rift.