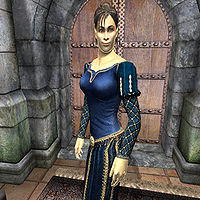 Caranya is a High Elf necromancer. Since she has the rank of Master-Wizard, she is part of the Council of Mages along with Hannibal Traven, Raminus Polus, and Irlav Jarol. However, she has not renounced her necromantic affiliation, despite Arch-Mage Traven's ban on necromancy within the guild, as you will find out in the related quest. She resides at the Arcane University until the Necromancer's Amulet quest is active. From this point forward she will be found at Fort Ontus.

Before the related quest is active, she can be found all day long at the Arcane University. She will spend most of the day wandering in the Arch-Mage's Tower Council Room; although starting at 8pm she will wander the University's grounds for two hours. She then retires to sleep in the Mage's Quarters from around 10pm until 7am of the next day. During the Light the Dragonfires quest, she and all other Imperial City citizens are confined to their homes.

As soon as the Necromancer's Amulet quest starts, she instantly relocates to Fort Ontus and becomes a member of the Fort Ontus Mages Guild. She then wanders around in the final room of Fort Ontus Understreets, never eating or sleeping until you make your appearance.

She wears an upper-class blue velvet outfit and blue suede shoes and carries leveled amount of gold. She doesn't wield any weapons, relying instead on a set of leveled necromancer spells and on a summon faded wraith spell for her attacks.

As you may notice the first time you speak with her, she seems to think that she has more importance in the guild than the lower rank members:"I'm Caranya, master wizard, and far too important to be talking to you. So go about your business, please?"

During the quest The Necromancer's Amulet, Hannibal Traven will explain about Caranya's efforts to protect the University: "Caranya insisted on removing it from the University. She said it posed a threat to the safety of the Imperial City. While I do not doubt that she was right, I question whether her motives were genuine. She seemed all too eager to explore its power. I fear she is not safe from the minions of the King of Worms. She is at Fort Ontus; please, go there and return with the Amulet. Help her to see that she should not use the weapons of the enemy, especially out of fear." In Fort Ontus, you must talk to her before killing her; until her dialogue is complete, she is essential. When you first encounter her, she greets you with surprise and shows you her true colors: "Well, well. This is quite a surprise. I thought you were Traven's lapdog, doing whatever he said, and yet here you are. Good that you've finally seen the light. The cause will benefit from your assistance." When, however, you ask to hand over the amulet she will tell you, with a mix of surprise, sadness, and anger: "What? You're here to take it back to Traven? Oh, my dear. I'm afraid you're in over your head. I don't answer to Traven. I heed only the word of Mannimarco. When he has the amulet, his power will be increased, and Traven will be helpless to stand in his way. You, I'm afraid, won't be standing at all. I promise I'll make this quick. I'd like to have you mostly intact, so Mannimarco can suck the marrow from your bones", at that point she loses her affiliation with the Mages Guild and proceeds to attack. Back at the University, Traven will be understandably surprised when told about Caranya: "Caranya turned on the Guild? I... I don't understand. She was one of my most trusted advisors. The situation grows more dire with each passing day, it seems. I fear where this will end."