The UESPWiki – Your source for The Elder Scrolls since 1995
< Oblivion: Places: Houses(Redirected from Oblivion:Buy a house in the Imperial City)
Jump to: navigation, search 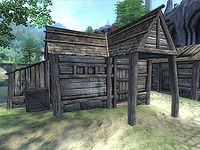 The Shack in the Waterfront District

Shack for Sale is a house for sale on the northwest end of the Imperial City's Waterfront District.

The shack can be purchased from Vinicia Melissaeia in the Office of Imperial Commerce for 2000 gold, and the five upgrades can be purchased from Sergius Verus at Three Brothers Trade Goods for 400 gold base cost per upgrade. Without any upgrades, the single-room shack contains only a bed, a chair, and a table. Though it is rather run-down and tiny, it can be a very convenient home due to its proximity to the Imperial City. If you incur a large bounty and wish to avoid guards, you can also fast-travel to Dzonot Cave and then swim here, as it is not inside the city's walls.

The dining area upgrade adds a bookshelf to the northwest corner and a rug under the table in the southwest corner, as well as three tomatoes in a bowl on the table.

The kitchen area upgrade places a food cupboard in the southwest corner and a rug in front of the door. This upgrade can be stolen from Stantus Varrid's private chambers or Tertius Favonius' house.

The sitting area upgrade adds two chairs—one by the table and another in front of the fireplace along with a small table.

The storage area upgrade adds two chests of drawers that contain clothing—one at the foot of the bed and another in the northeast corner next to the fireplace—and a clutter chest on the other side of the fireplace. This upgrade can be stolen from Luronk gro-Glurzog's basement or Marinus Catiotus' house.

The wall hangings upgrade hangs three tapestries on the walls and a painting above the fireplace. This upgrade can also be stolen from Stantus, Tertius, or Luronk.

The crate outside the house does respawn, and so is not safe for storage.