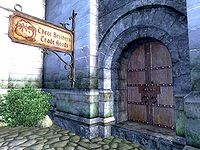 Three Brothers Trade Goods is a general goods store located in the Imperial City's Market District. It is found across the street from The Merchants Inn and next to the Black Horse Courier and Jensine's "Good as New" Merchandise

The store is jointly run by brothers Tertullian and Sergius Verus. The third brother, Cicero, only lives there when not doing duties for The Black Horse Courier.

Tertullian has 1000 gold and a Mercantile skill of 60. When bartering, he will buy anything from you while only selling a variety of miscellaneous items and the unique Helm of the Deep Delver, which drains your speed while giving you resist poison and disease as well as casting a light spell.

Sergius also has 1000 gold and a Mercantile skill of 60. Like his brother, when bartering, Sergius will buy everything from you while only selling a variety of miscellaneous items and the unique Akaviri Sunderblade, which has disintegrate weapon and armor effects. He also sells all of the upgrades for your waterfront shack for a base price of 400 gold. 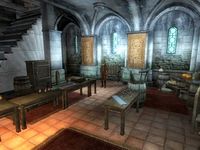 The main trading room is located on the ground floor and consists of a counter and a selection of the vendor's wares on display. It's not exactly inviting, as the brothers seemingly lack any sense of arrangement: Chairs are piled up on each other and there's a messy corner filled with food, barrels and sacks. Opposite the front door is a table with a piece of cloth and assorted gardening and mining tools. A barrel next to the table contains the same. The table in the northeastern corner holds a basket with seven ears of corn. Behind it sits two pumpkins and a head of lettuce with an additional three heads hidden in the basket. There are two open sacks, both containing food, and three closed ones with clutter. The barrel to the right has a chance of a repair hammer and some gold, while the other barrel only holds clutter.

Next to the front door is a small table with various clothing: A pair of blacksmith's pants and a green wool shirt along with four pairs of shoes: buckled shoes, stitched leather shoes, rough leather shoes and clogs. The cupboard near the bottom of the stairs only contains clutter. The counter displays various kitchen utensils and behind them are three lockpicks and a few more rolls of cloth. The lectern only holds randomly chosen writing materials, while a mysterious note implies that one of the brothers might have a secret love affair, and a handbill suggests where they stock up on alchemical ingredients. Behind the counter are a barrel and a cupboard with clutter. 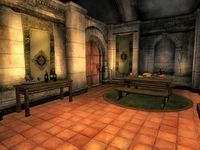 The three brothers live upstairs as is customary with Imperial City stores and houses. The Private Quarters are spacious and split up in a dining area with an alcove where Cicero sleeps, and a room behind a wooden door where Tertullian and Sergius sleep in separate beds. The door opens to the sight of a well-dressed dinnertable with three pieces of mutton, three pears, two potatoes, two cheese wedges, a bread loaf and a bottle of cheap wine. On the table opposite the wooden door, there are two bottles of mead and two additional bottles of cheap wine.

In the alcove next to Cicero's bed, on top of some drawers filled with clothing, is a locked chest with a chance of some silverware, jewelry or gold. In the opposite corner are two barrels containing clothing, a barrel with a chance of a lockpick and/or repair hammer as well as two sacks with clothing and a chance of some gold. Behind the barrels, a locked chest reveals up to three ramdomly selected and leveled pieces of equipment.

Behind the wooden door is a cupboard with clutter and, to the left, a desk with writing materials and the occasional book. Tertullian sleeps in the northwestern corner, and near his bed is a chest with clutter. In the opposite end where Sergius sleeps, some drawers reveal some spare clothing. 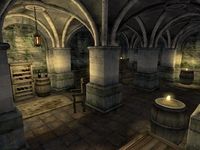 Halfway down the stairs, on the landing, sits an unlocked chest with clutter and a chance of one or two torches, as well as a barrel and two sacks with even more clutter. In the basement area, along the wall, is an empty crate and a barrel with a possible repair hammer. In the southwestern corner are two barrels with clutter and maybe a torch or hammer, and in the next corner, three barrels with clutter. In the last corner, the three brothers' wine collection, spread out in five wine racks, which contain nearly twenty bottles of cheap wine, and next to them, on top of a barrel with clutter, a bottle of Tamika's West Weald Wine and one of Surilie Brothers Wine.