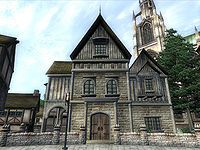 Arborwatch, a picturesque little house in the heart of Chorrol

Arborwatch is a house for sale in Chorrol's Great Oak Place.

The house can be purchased from Countess Arriana Valga for 20,000 gold, though she requires a disposition of 70 and a fame of 12 before she will sell it. There are eleven upgrades in total, which can be purchased from Seed-Neeus at Northern Goods and Trade for varying prices. Completing A Shadow Over Hackdirt grants a disposition of 100 with Seed-Neeus which will help with the prices. Note that while one of the upgrades available for purchase is "Servant's Quarters", no help-for-hire is available for this house. 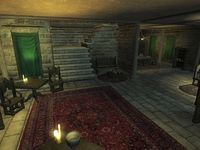 The front door of Arborwatch opens into an entry with stairs ahead leading up to two doors; the one on the west leads to the bedrooms, and the one on the east leads to the suite. The area in the western part of the ground floor contains only a dining table and a single chair. The kitchen area upgrade adds a cupboard and a barrel, both with food, to the northern corner next to the door, along with a table and stool. The sitting area upgrade places two tables, two chairs, a bench, a cupboard containing clutter, and a rug in the eastern area between the front door and the stairs. It also adds a bench and table next to the stairs, and a small table on the landing before the head of the stairs.

The study area upgrade adds four bookshelves to the area near the northern window as well as a desk and chair with two blackberries and a bottle of Tamika's West Weald Wine on the desk and a new rug. The dining area upgrade places four more chairs around the dining table, sets the table with five place settings and a bottle of Surilie Brothers Wine, and hangs a chandelier above the table. It also places a rug under the table and a wine rack on the southeast wall which holds four bottles of Surilie Brothers Wine, a bottle of Tamika's West Weald Wine, and a bottle of cheap wine. The dining upgrade adds three more serving tables to the walls around the dining table and two bookshelves on the northeast wall. 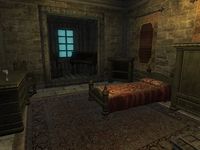 The bedroom level of the house is a short hallway with two doorways on either side at the end. The only thing on this level is a single bed in the room on the northeastern end of the floor. The servant's quarters upgrade fills the empty room on the southwestern end of the floor with a round rug on the floor, a table in the western corner, a cupboard in the eastern corner that contains clothing, and a single bed in the southern corner with a chandelier above it.

The bedroom area upgrade places a nicer single bed in the northeastern bedroom, with a clothing cupboard in the eastern corner. A clutter chest sits on the wall next to the doorway, and the chest of drawers on the southwestern wall also contains clothing. A chair is added to either side of the chest of drawers, and another with a desk in the alcove on the northwestern wall. The desk contains clutter. A chandelier is hung from the middle of the ceiling.

The middle wall hangings upgrade hangs two paintings and a tapestry in the servants quarters and two tapestries and a painting in the bedroom area, as well as a lantern in the hallway between the rooms. 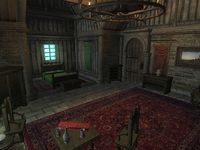 The suite is a completely bare room without upgrades. The suite area upgrade adds a double bed and a clutter chest to the alcove in the southeast of the room. The new cupboard in the eastern corner of the room holds clothing, as does the chest of drawers on the southwest wall. Two bookshelves are added to the room as well as four chairs, a bench, three tables (including one very small one), and a chandelier. The upper wall hangings upgrade adorns the walls here with four tapestries and three paintings.