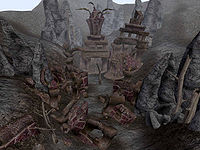 Tusenend is a shrine to Molag Bal in the Molag Amur region, directly southeast of the Erabenimsun Camp. 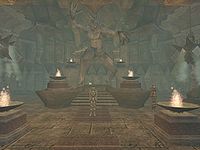 The shrine to Molag Bal inside Tusenend

The exterior is guarded by leveled daedra. Inside are four Daedric worshippers who will attack you on sight. On the altar sits a diamond, a steel battle axe and a piece of cursed raw ebony. On the left side of the room is a bedroll and a table on which sit a scroll of elemental burst:fire, a scroll of frostbane, a potion of cheap fortify fatigue, a standard fortify magicka potion, a bottle of greef, a lesser soul gem, and some ectoplasm in a bowl. Also on the table is the Heavy Armor skill book Hallgerd's Tale. Next to the table are two trapped chests, one of them locked, containing random books, potions, enchanted weapons, gold, and some enchanted clothing. On the right side of the room are three bedrolls surrounding a small fire, along with several small sacks and a locked chest containing a random weapon and gold. 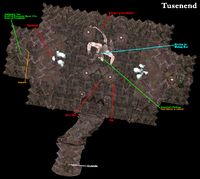