You may come across the vampire Mastrius in the Salvel Ancestral Tomb inside the Ghostfence during your travels. If you are a fellow vampire you can speak to him and learn that he was imprisoned in the tomb by the goddess Azura and that he may have found a way to escape. Mastrius will ask you to bring him the artifact shield Spell Breaker, and a Daedra's heart. The heart can be obtained by killing Daedra or buying from an alchemy shop before you became a vampire.

Spell Breaker is more difficult to obtain, but it can be found in the Dwemer ruins of Bthuand, out in the middle of nowhere, far west of Tel Mora (northwest from the Cavern of the Incarnate). If you have a Levitate spell (or a good Jump spell), get over the fence right outside Salvel Tomb then go a short distance west to the Foyada. This short Foyada leads directly north to Bthuand, right up over the hills at the end. The shield can be found behind some stones at the inner section of the ruins.

Return to Mastrius with the shield and heart and he'll ask you for one more favor...the strength to break the binding spell. Agree and he'll absorb half of your health and fatigue...and then attack you. Whatever happened to honor among vampires? Once you kill him his full suit of ebony armor, along with the Spell Breaker, are yours. 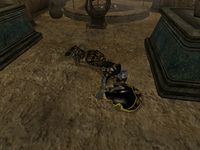 Mastrius has fallen and he can't get up