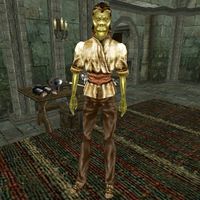 Shadbak gra-Burbug is an Orc smith who works for the Imperial Legion at Fort Pelagiad. She has a variety of armor and weapons for sale, as well as offering repair items and services. If you are a member of the Legion of low rank, you must have a uniform in order to deal with her.

Shadbak is not entirely incorruptible, as you may discover during the Free New-Shoes Bragor quest for the Thieves Guild. When asked about latest rumors she says that promotions come quickly in the Legion for diligent members, usually accompanied by some nice armor.

Like all Orcs, she has a natural resistance to magicka, and can boost her health, fatigue and attack for short periods, at the cost of agility; otherwise she knows no spells.