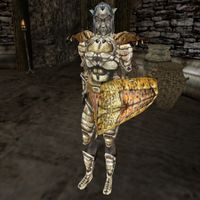 Missun Akin is a Dunmer archer and the master trainer of Marksman and can be found in his hut atop the Falasmaryon Stronghold. This experienced hunter is more than capable of holding his own in the hostile environment there. He is also a major trainer in Athletics and Long Blade.