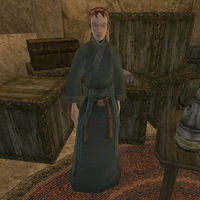 Melie Frenck is a Breton healer who sells potions and a few Restoration spells to any who need them at the Telvanni canton Temple, located on the lower level of the waistworks, in Vivec.

She wears a common robe with matching shoes. She also carries a cheap restore health potion, a cheap restore fatigue potion and 30 gold. Aside from her natural bonus and resistance to magicka, and her ability to shield herself for short periods, she knows the following spells: Seryn's Gift, Veloth's Benison, Veloth's Grace, Panacea, and Regenerate.

Melie has the following spells available for sale: