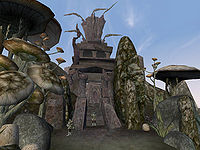 Kaushtarari is a small shrine to Malacath on an island south-southeast of Sadrith Mora and east of the Erabenimsun Camp. The exterior of the shrine is guarded by two Orcs, a warrior and a barbarian both wearing sets of Orcish armor. Two more Orcs guard the interior of the shrine, a healer who carries several potions and an agent named Bogakh gro-Mar. He is a medium trainer in Acrobatics, Light Armor, and Sneak, if you can calm him or sneak up on him.

As you enter the shrine, stairs lead to a flooded chamber with no obvious exit. The main shrine chamber can be found by swimming under water from the flooded room. The altar holds a ruby, an emerald, a daedra's heart and a piece of cursed raw ebony. Behind the altar are three locked chests, two trapped, one containing gold and the other containing an assortment of random magical items, potions and books. The untrapped chest contains a few pieces of Orcish armor. A silver candlestick and a scroll of shockguard can be found on top of the middle chest. 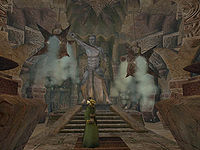 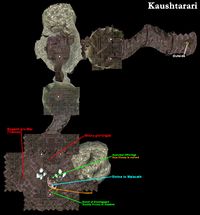