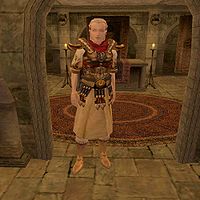 Imsin the Dreamer is a Nord master-at-arms and Knight Protector of the Imperial Legion at Buckmoth Legion Fort.

She wears an Imperial templar knight cuirass with matching skirt, belt and pauldrons. She also wears netch leather greaves, heavy leather boots, a common shirt and matching pants. She carries an Imperial broadsword, common shoes and up to 100 gold.

She has a few quests for members of the Legion, and also offers medium training in Axe, Blunt Weapon, and Long Blade. Aside from her natural resistance to shock, immunity to frost, ability to shield herself, and a natural frost damage spell, she knows no spells.

Be sure to wear your uniform when talking to her, or she will refuse to speak to you.