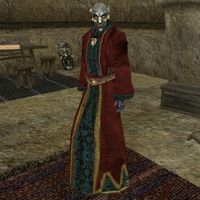 Goris the Maggot King is a Dark Elf necromancer who has taken up residence in the Venim Ancestral Tomb.

He is mentioned in the Note from Bakarak, having previously sent a horde of the undead to wipe out a smuggling operation at the Dralas Ancestral Tomb after the smugglers demanded he pay them for their services.

Aside from these spells, Goris is the only non-Breton in Morrowind who can cast Dragon Skin.

This Morrowind-related article is a stub. You can help by expanding it.
Retrieved from "https://en.uesp.net/w/index.php?title=Morrowind:Goris_the_Maggot_King&oldid=2481125"