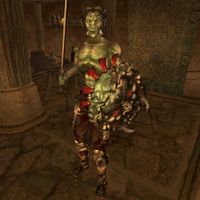 Galos Farethi is a Dunmer warrior found at the Dren Plantation inside Dren's Villa. Although officially a member of House Hlaalu, he is also a member of the Camonna Tong and serves as Orvas Dren's bodyguard. He has worked with the Ienith brothers, Navil and Ranes, for several years and has a great deal of respect for them.

Galos wears Orcish greaves and ebony boots, and wields a Daedric katana along with a Daedric shield. He also carries an extra set of Orcish boots.

Galos can be found patrolling inside the villa. Although not directly involved in any quests, you will need to sneak past him in order to get inside Orvas Dren's bedroom (which you will need to for several quests). He carries Dren's Manor Key, which you can attempt to pickpocket in order to unlock the door.

If you speak with him after killing the Ienith brothers while executing the Morag Tong writ for them, he will be furious at you for killing his colleagues and attack.