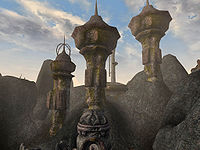 Druscashti is a Dwarven Ruin located southwest of the Urshilaku Camp and northwest of Bthungthumz, occupied by the Quarra Vampire Clan.

The ruin is divided into two sections, the Upper and Lower levels.

The main entrance to the ruins is the upper level. There are three vampires located here (Kjeld, Pelf, and Knurguri), as well as three Cattle. There are some minor items (a potion, some low level armor, common clothes, armorer's hammers, alchemy ingredients) around. A copy of the book Trap is here as well. There is a chest that contains a pair of daedric greaves and ebony boots (among some other minor armors), along with another chest containing an ebony shortsword (among other minor weapons).

The lower level is accessed from the upper level, and in this area there are four vampires (Siri, Areas, Igna, and Volrina Quarra) and four Cattle. There are some minor weapons, armor, and potions around, and a barrel containing a Blood of the Quarra Masters potion desired by both Raxle Berne of the Berne Clan and Mistress Dratha of House Telvanni.