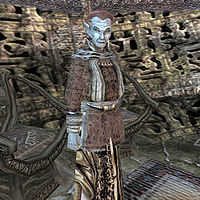 Dratha is a Dark Elf sorceress in the Upper Tower of Tel Mora. She is a Master in House Telvanni. Mistress Dratha is extremely disdainful of men, such that she has banned men from living in her city. If you are female, you will experience many advantages in conversation with her. She is the oldest living Councilor in House Telvanni, sustained by the necromantic arts; Divayth Fyr is the only Telvanni older. Dratha is, like the other Councilors, an arrogant isolationist concerned with little more than maintaining power and collecting artifacts. She is rumored to have been pressured by the Temple to allow them to put some healers in Tel Mora (women, of course).

Dratha wears an extravagant shirt and an exquisite skirt with matching shoes. She also carries a glass stormblade, a scroll of the black storm, a scroll of manarape, and two standard restore health potions. Aside from her natural resistance to fire and the sanctuary provided by her ancestors, she also knows Dratha's Spite.

When first spoken to:

chores
"To complete one of my collections I need the Amulet of Flesh Made Whole."
Flesh Made Whole
"Ones [sic] of the guards in Tel Naga, Master Neloth's tower in Sadrith Mora, has kept this amulet away from me for the last fifty years or so, the selfish little Bosmer. Deliver this amulet to me and I will reward you."

If asked again before getting the amulet:

Flesh Made Whole
"Oh? Have you found the amulet?"

Yes, here it is.
"So you found the amulet, but you want to keep it to yourself? You are walking a fine line, %PCName."

No, no yet.
"Do not let me think you are unable to finish this task for me. I despise incompetence. Of course, I expected nothing less from a man."

Once you have the amulet:

"Good. In exchange I will give you a spare amulet of my own. Here. Take it. You are dismissed." (If PC is male)

"Yes, this is right amulet. You've done well, %PCName. Why not take this amulet of mine? And some scrolls as well." (If PC is female)

If asked about after the quest is done:

"I have not yet discovered all the amulet's properties, but I believe it has enchantments that are unique." (If PC is female)

"Are you still here? You have my permission to leave." (If PC is male)

If disposition is at least 40:

Telvanni Hortator
"Oh, b'Vek. I think it's a man. It's wearing a man's skin. For now. Listen. Very carefully. There is nothing wrong with males. There's nothing wrong with rats, per se. I just don't like males. Or rats. So I think you'd best be going. While you can."

If disposition is at least 80:

"Well. Aren't you the cutest thing. And that wink is so adorable... I MUST have it. Here! Hello? Who's on duty? I need someone to hold this fellow's head while I gouge that cute little winking eye out..."

Leave before something terrible happens.

Hurl yourself at her feet and plead for a hearing.

"Oh, that's so pathetic. Look at the poor bunny. Oh, I suppose now we must be merciful, and at least listen to it."
Continue with your story.

"Hmm. Well. I'm glad we listened. And glad you persisted. So there's something to those old prophecies after all. I shouldn't wonder. Pig-headed Battlemages don't pay attention to Lady Azura's portents as they should. And you are the foretold Nerevarine? Well, then. You shall be our Hortator. You have my vote. And my blessing. And this scroll. It will come in handy where you're going." (If PC is male)

"Hmm. So there's something to those old prophecies after all. Pig-headed Battlemages don't pay attention to Lady Azura's portents as they should. And you are the foretold Nerevarine? Quite a shock to those mallet-headed House Fathers, eh? Nerevar comes back... as a woman? Haw! Certainly. I'm quite happy to name you Hortator. Here. Take these scrolls with you. Never know when they'll come in handy." (If PC is female)

If spoken to again after you have her vote:

"You have my vote, %PCName. I just wish I could see Berel Sala's face when he hears that you have been named Hortator by all three Great Houses. I am confident that you can earn the votes of the other councilors... Well, except maybe Gothren. Someone ought to retire him quietly." (If PC is female)

"Yes, I heard your story. I believe you. You have my vote. There's no need to stay here." (If PC is male)

"You are not thinking clearly. Or you could never say such a thing. I may forgive you, but please do not bring the subject up again." (If PC is female)

"Thank you. I don't think I realized that, after a long life like mine, I might ever hear something as stupid and offensive as that. If I had, I would have prepared more carefully -- perhaps by burning you to a crisp before you could speak. I believe you will leave now." (If PC is male)