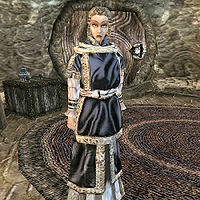 Berwen is a Wood Elf trader who has a mushroom-style shop in Tel Mora, where she buys and sells all manner of goods (except for thieves tools). Berwen has a slowly restocking supply of luminous russula and violet coprinus, but it may take several days for the plants to grow back. Her most valuable possession is a grandmaster's retort.

Berwen has recently been having trouble from an uninvited guest. You will find a corprus stalker in the storage area upstairs, and Berwen has barricaded her attic with some crates. The Fighters Guild has been hired to take care of the problem.

Berwen wears an extravagant shirt with matching skirt, belt, and shoes. She also carries a steel staff. Aside from her natural resistance to disease, and the ability to command animals, she knows the following spells: Demoralize Beast, Rally Beast, Demoralize Creature, Demoralize Humanoid, Rally Creature, Rally Humanoid, Almsivi Intervention, Detect Enchantment, Tevral's Hawkshaw, Divine Intervention, Mark, Recall, Telekinesis, Detect Creature, Detect Key, and Detect Creature. She also possesses a pair of unique abilities, being the only non-creature on Vvardenfell to benefit from them;

"Are you here to get rid of the Corprus Stalker?"

"I can't buy or sell anything with a Corprus Stalker on the loose!"

"We were able to trap it upstairs, but no one wants to risk disease by getting close to it. Normally Master Aryon would take care of it, but he's been so busy recently. Are you saying that you're up to the challenge?"

Yes, I am.: "Excellent! Have at it! But be careful!"
No, sorry.: "Then leave now. It's not safe here with that thing on the loose!" Goodbye. (Disposition down by 2)

"We were able to trap it upstairs, but no one wants to risk disease by getting close to it. Normally Master Aryon would take care of it, but he's been so busy recently. Please hurry. It's wrecking my shop!"
"Aren't you finished yet? Didn't you say you'd kill it for me?" Goodbye. (Disposition down by 2)
"Thanks for dispatching that Corprus Stalker, %PCName. You obviously have great skill." (Disposition up by 40)
"Thank you for getting rid of it."
"Yes. Thank you very much."

"Ahhh...my old friend Girith! I heard you helped him out of some serious trouble not long ago. Some business with a couple of no-good Ashlanders, right? They'll never learn. Anyway, you have my thanks; I had quite an investment in those guar hides. Would have taken quite a beating had Girith not been able to sell them. Here, take these as a token of our appreciation." (Disposition up by 10) (You receive three Fortify Health Potions and a Ring of Hornhand)
"Thank you again for helping us out with that Ashlander business."