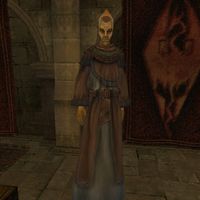 Andil is a High Elf apothecary who sells ingredients, apparatus, and potions in the Services Tower at Tel Vos. He plays a minor role in a House Telvanni quest, but is otherwise not notable.

Once you have begun the Cure Blight quest:

After you finish the quest:

If you mention the topic again after completing the quest Mudan-Mul Egg Mine, he says: