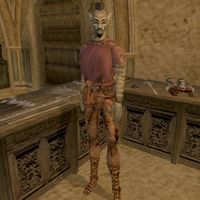 Alds Baro is a Dark Elf smith who owns a smithy in the Outpost of Maar Gan. He is a Kinsman of House Redoran, but offers his services to anyone, though fellow Redoran members will receive better prices, of course. He is not involved in any quests, but has several useful rumors to spare.

He wears common pants, a common shirt, common shoes, a common belt, and a common amulet, and he carries a restocking repair tools (10 hammers, 6 journeyman hammers, and 6 master hammers), a Dwarven mace, and silver arrows, and silver bolts. Aside from his natural resistance to fire and the sanctuary provided by his ancestors, he knows no spells.

(Disposition > 30) "The Dremora over at the shrine has been unusually short-tempered lately."

If you have completed The Beauty and the Bandit:

(Disposition > 30) "I've heard that some traders have been having problems with the Ashlanders. It's not wise to hunt in Ashlander territory."