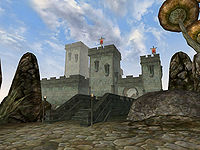 The entrance to Wolverine Hall

Situated just south of Sadrith Mora, Wolverine Hall was an attempt on the part of the Imperials to project power in a region of Vvardenfell where they were relatively powerless. The Telvanni tolerated the presence of the fort mostly because nobody cared enough to knock it down. Wolverine Hall housed the services not permitted in the town itself, such as the Mages Guild, Fighters Guild and Imperial Cult shrine. These were concealed within the fort itself. Between the Hall and the town itself was Dirty Muriel's Cornerclub, a Nord-style building that was home to the local Thieves Guild.