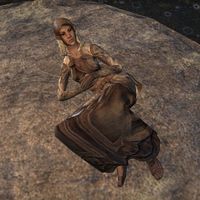 Spinner Indinael at the altar

Spinner Indinael is the head spinner of Ouze, guarding it from those who would disturb the Oathbreaker spirits buried there. She is first found at an altar near the center of the grove. 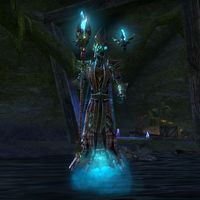 Spinner Indinael as a lich

The Worm Cult will later steal her body and take it to the Cave of Ouze, resurrecting her as a Lich. She must be subdued and freed using the Totem of Y'ffre.

She can initially be lying injured on an alter at the center of Ouze.

"Someone found help. I feared it would soon be too late."
Don't worry, you're safe now.
"Safe? None of us are safe. All the threads are breaking apart. The Worm Cult awakens the Oathbreakers! The necromancers enslave the spirits of Ouze!
You must stop this!"
Are you hurt?

"The necromancers bound and bled me. I sent the other spinners to get help, but it's too late to save me now. My tale comes to an end.
But that's not important. The Worm Cult's come to deny the shapeshifters their eternal slumber."

What are the necromancers doing?

"The Worm Cult wants to enslave the ancient spirits in this mire.
The Bosmer buried here spurned the Green Pact long ago. Shapeshifted, unwilling to submit to Y'ffre's will. They are eternally trapped and eternally protected."

Why not simply destroy the spirits?

"No … it is not that simple. We call them Oathbreakers, but they are not evil.
Their spirits rest in Ouze until the time of renewal. They must rejoin the Bosmer so our race can be whole once again. The Worm Cult would put an end to that hope."

Then I'll destroy the heartwood for you.
"The Worm Cult piled the spriggans' corpses like so much cordwood. Their disrespect knows no bounds.
Burn what's left of the spriggans. You must deny the necromancers the heartwood."

After you burn the piles of heartwood, you can return to the altar and speak with her spirit.

"My death is the beginning of a new story, and not a happy one, I fear.
I feel the pulse of the Worm Cult. I must resist."
I'm sorry I was too late to save you.
"Mortal trappings are unimportant. I must see this place kept safe.
Have you burned away the heartwood? Is it out of the Worm Cult's clutches?"
I burned all I could find.
"Then you've thwarted the necromancers' plans to enslave the creatures of Ouze. They've one recourse left to them, but with your help, I can stop it."
What are the necromancers planning?
"Thanks to you, their plan for an army of shapeshifters has failed. Now they must put all their energy into creating one powerful creature.
You must get what they need before they discover it. I've hidden it in a sack nearby. Go, quickly!"
I'll get that sack. / Interesting. I'll go get that sack.

"You must go quickly. My hold on this world grows weaker with every passing moment."

How did you hide it?

"A spinner is not without defenses. I am a storyteller—I simply changed the narrative
I hid the thread of its existence behind a tangle in Ouze's story. The Worm Cult, intent on their own plot, didn't unravel the knot."

After retrieving the Totem from the sack, you can speak to Indinael once more.

"Cleverly hidden in plain sight. That totem is one of the most powerful relics in my possession. It will keep the Worm Cult from mastering the Oathbreakers.
But first, you must prepare."
How do I do that?
"You will need the strength of a powerful Oathbreaker in order to overcome the necromancers.
Guardian Celonron was the strongest shapeshifter of those who refused the Green Pact. Ever since the Totem of Y'ffre bound him here, he has protected the other spirits."
How can he help? / How can Guardian Celonron help?

"You'll have to defeat him in battle to disperse his excess energy. The totem will absorb the wisps left from his exertion.
He's aided the spinners for centuries, but still, he's more likely to fight you than help willingly."
I'll go find him.
"Once you've empowered the totem, you will be able to use it. You will know when it is time."

Tell me more about the shapeshifters.

"When the woods were new and wild, we were shapeshifters. It was necessary back then, since the Valenwood had not settled on one form either.
Y'ffre gave all of the Valenwood a form and a purpose. But some Bosmer refused the gift. They remained wild."

Inside the Cave of Ouze you'll come face to face with Indinael's lich. She'll waver between the evil creature she has become and her bosmer spirit:

After defeating her lich form, you can speak with her freed spirit.

"The threads of Ouze are repaired. You've saved the Oathbreakers, and perhaps all of the Valenwood."
Did you know I'd have to kill you?
"The threads pulled in every direction. They threatened to snap. My death was the least of the evils possible.
With your help, I challenged the story. And with your strength, I was able to change my fate."
I wouldn't have been able to do it without your totem.
"A weapon is only as good as its wielder. Not one in a hundred could have used the totem to direct their will.
The totem is sacred among the spinners, so it must be returned. I've asked Gwilon to thank you personally for your aid."
I'll talk to Spinner Gwilon.

"I've been watching over Ouze for so long, it's hard to think of it going on without me. Even under Gwilon's care.
I think I'll wait a little while before going to sleep. Perhaps I can still be of help …."

This Online-related article is a stub. You can help by expanding it.
Retrieved from "https://en.uesp.net/w/index.php?title=Online:Spinner_Indinael&oldid=2198413"
Last edited on 20 August 2020, at 01:47