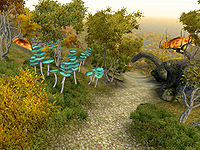 Mania is a region of the Shivering Isles located in the northern highlands of the main landmass. It reflects the lighthearted side of Lord Sheogorath's madness. It is similar to Vvardenfell's West Gash region in appearance, with expansive grasslands and huge mushroom trees. Overlook Road passes through the region. The Isle of Flame, the Laughing Coast, the peninsula of Saint's Watch, and the Jester's Spine Mountains are important geographical features in the region.

The villages of Highcross and Hale appear welcoming but are populated by harmless maniacs. The halls of Brellach contain the Wellspring of the Aureal. The lawbreakers of the region are imprisoned in the deadly ruins of Aichan. Cylarne, thought to have been the original capital of the Shivering Isles, is located on the Isle of Flame.[1]