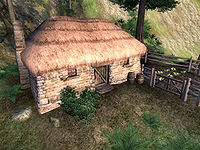 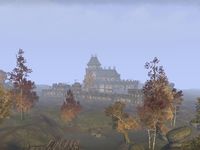 Drakelowe is a settlement located along the Reed River in the Nibenay Basin of Cyrodiil.

During the Alliance War of 2E 582, Drakelowe Keep was an expansive and strategically important fortress located on the western bank of the river. It had its own farm, mine and lumbermill, and was heavily fortified. It was initially located within the territory held by the Ebonheart Pact, although the keep changed hands many times over the course of the war.[1]

By 3E 433, nothing remained of the keep. Drakelowe consisted of a small farmhouse on the east bank, inhabited by an ex-member of the Glenmoril Wyrd named Melisande.[2]