By 3E 427, House Redoran had taken possession of the harbor and converted it into a military outpost. There were few services, apart from some poor traders and a smith, and no means of fast transport to reach it. The settlement's principal structure was a Redoran watch-tower, and there was an outcast Ashlander camp directly south of the post, atop a hill. A large Daedric Shrine of Ashalmawia was directly east and visible from the village. 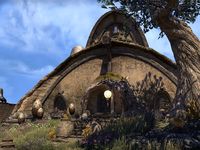