"Let me know when you want to get real work, (player's name)." 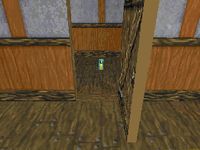 The alchemist stashed this vial in a storeroom

Head to the specified town and ask around to find the location of the alchemist's shop. The shop will be open during its normal hours, but locked otherwise. If you attempt to enter after hours, be prepared to pick the lock or otherwise force the door. Once inside, find the potion and grab it, then make your escape. Beware, as there may be some guards waiting for you at the entrance, either a battlemage, an iron atronach, a daedra seducer or a werewolf. Kill it and return to the Thieves Guild.

When you give the potion to the quest giver he will say: