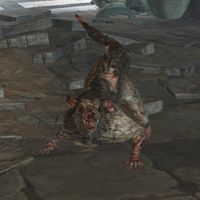 Skeevers are an enemy group in Blades that are hostile to the player. They are giant rat-like creatures that are weak to fire damage, but resist shock and poison damage. While most Skeevers deal cleaving damage, Venomfang Skeevers also deal poison damage with their bites. They all have stagger immunity, which means that they can not block attacks, but instead swarm the player in groups and can only be hit with melee weapons while they are attacking. As they have no stamina or magicka, they do not have any spells or abilities. Skeevers cannot appear as a boss.