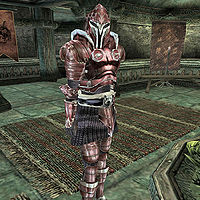 Aleri Aren is a Dunmer crusader, living in the Guard's Quarters of the Royal Palace. She's the brains of a plot featuring disloyalty among the guards to the new King, Hlaalu Helseth.

She wears a complete set of Royal Guard armor and carries an exclusive restore health potion.

"I've been a Royal Guard all my life, and so was my mother and her mother. I served King Llethan for many years, and now I'll serve King Helseth. Long live the King, and long live the Emperor. It's none of my business, of course, but why do you want to be a guard? You look like you've done well enough for yourself as an adventurer."

Ask about King Llethan.: "What about him? He was what he was. He was the king, and my noble lord, and I served him faithfully."
Ask about King Helseth.: "It is my honor to serve King Helseth and Queen Barenziah."
Mention your Hlaalu connections.: "I see. My ancestors have all been Hlaalu.... But my primary loyalty, of course, is to King Helseth."

Once you have been told to specifically mention your Hlaalu connections, you will receive a different response:

Mention your Hlaalu connections.: "He what? Ivulen Irano told you to tell me about your Hlaalu connections? And told you NOT to tell Tienius Delitian? I have no idea what that's all about. Are you sure you heard him right? He's not the brightest star in the sky... he gets confused sometimes. I wouldn't worry about it. I'll talk to Ivulen Irano later when I get a chance. I'm sure it's just a misunderstanding."