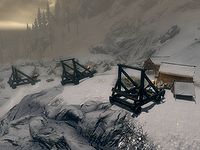 Windhelm Military Camp is an Imperial camp southeast of Windhelm.

This camp is added during the Civil War quest Battle for Windhelm. It contains three catapults and many tents.

At any other time, this spot is occupied by a hunter camp consisting of three tents, a dead deer, some food, and three hunters.