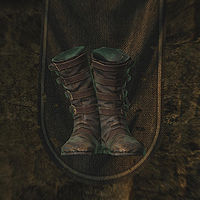 Thieves Guild Boots are the shoes for the set of armor used by Thieves Guild members. Alongside these boots, this set of equipment also includes armor, gloves, and a hood. The boots have been enchanted to fortify pickpocket chances by fifteen percent, making it easier to remove loot from people's own person. Tempering Thieves Guild Boots requires a piece of leather and the Arcane Blacksmith perk.

These boots, alongside the rest of the set, is originally given to you by the fence Tonilia upon successfully taking care of business around Riften. The boots are not just a perk of membership in the organization; wearing the boots with the rest of the equipment will also make it clear to guards that you are a guild thief, which they will comment on by saying, "I know Thieves Guild armor when I see it. You're not fooling anyone." or, "Try to hide it all you want. I know you're in the Thieves Guild... and so do the other guards."

After completion of Scoundrel's Folly, you will be told to see Tonilia once again to have her provide you with an improved version of one of the pieces of this set. The upgrade available for the boots is not only lighter and provides more protection, but it is also worth more gold. Furthermore, its enhanced enchantment provides an additional ten points towards your pickpocket success chances over the basic version, for a total of 25 points through the enchantment.