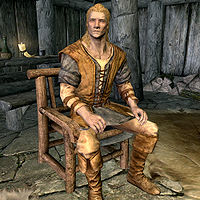 Solaf is a Nord lumberjack and the proprietor of Gray Pine Goods. He lives there with his brother Bolund who runs the Falkreath lumber mill. He will buy and sell any type of item as he is a general merchant.

He wakes at 8am and opens his store for business. At 8pm, he closes it and heads to Dead Man's Drink for three hours, then goes back home for sleep at midnight.

He wears a set of farm clothes and a pair of boots. He is equipped with an iron dagger, and carries a key to his store, as well as a selection of common items and gold.

When approached he can potentially greet you with:

"Well met. Unlike my brother, I've no dislike of strangers. Met lots of 'em while I was a Stormcloak."
"Looking for something?"
"Can I get you something?"

He may also mention his brother if he's inside his shop:

As long as he doesn't know you, he may also say:

"What do you need, stranger?"

While you browse around his shop, he may tell you:

"Look around all you want, but don't try anything funny."
"Hey! You planning to steal something? Don't even think about it."

"Steal anything from my shop, and you'll regret it."

Although he may offer a friendlier:

You can also ask him about his previous Stormcloak comment:

You're a Stormcloak?
"I was once, but not any more. I was wounded in a skirmish up near Windhelm. This was years ago, mind you." He will then go on to say, "Now, maybe I don't pick up a blade in Ulfric's name no more, but I still hold with his ideals. Skyrim is Nord land, and we ought to rule it. We don't need no help from the Empire on that count."

It's also possible to ask about his brother:

You mentioned a brother? Who is he?
"His name's Bolund. He's the one who works the lumber mill down by the river. If you meet him, don't expect much in the way o' conversation. He ain't one for talking, especially with folk he don't know."

When Solaf and Bolund meet inside the store, they may engage in conversation:

Inside the local inn, he may also have a short request for the innkeeper, Valga:

Solaf: "Keep them coming and keep them strong, Valga."
Valga: "Will do."