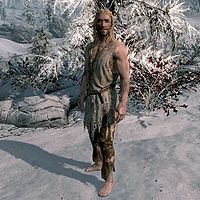 Sigar is a Nord bandit and a cannibal. After the conclusion of the quest The Taste of Death, you may encounter him in the wilderness standing over a dead person's body. He will recognize you, saying: "It is the Champion of Namira! I was just about to eat. Here, you should have the first bite." If you killed the cannibals during the related quest however, Sigar will be hostile towards you.

Sigar can also show up near a corpse after you killed Eola and failed at the Taste of Death quest; when you get near him, he'll say "Don't look at me. I didn't kill her. I was just... making sure the body got buried.", and then start running away from the Dragonborn in fear.

Sigar wears ragged robes, and is equipped with a leveled dagger which can be up to Daedric quality. He can cast the spells Flames, Heal Other, Muffle, and Invisibility.

He is tied to the corpse and will follow it if it's moved (either manually or via reanimation).[verification needed — see talk page]