Skyrim:Wreck of The Pride of Tel Vos 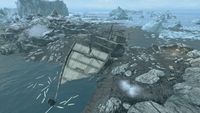 The Wreck of The Pride of Tel Vos

The Wreck of The Pride of Tel Vos is a shipwreck on a small island east of Winterhold.

It is home to a small band of bandits who have established a camp around the wreck.

Wreck of The Pride of Tel VosEdit

On the western side of the wreck is a small camp, with two bandits standing guard. There is a central campfire, with a cooking spit hanging over it. To the west of the campfire are two lean-tos, with an unowned bed roll under each of them. To the right is a novice-locked chest, and to the left a tanning rack. On the other side of the campfire is a rack holding five salmon. On the eastern side of the wreck is a small island, with a second campfire with some crates and barrels nearby.

The ship itself is split in two, with a flight of stairs on the eastern side of the large piece leading up to the cabin, where a bandit chief lives. There are several barrels and crates around the room, along with an unlocked chest with a bear trap set directly in front of it and an unowned bed roll on the floor to the right. Against the wall is a table, with a random magicka potion and several empty wine bottles around it. There are stairs leading down to the partially flooded mid-deck, with several crates and a Nordic barnacle cluster on the floor. The lowest deck can only be reached from outside where the ship's hull has separated. Here you can find a second Nordic barnacle cluster, and at the waterline you can find a waterlogged chest containing the quest item Lymdrenn Tenvanni's Journal. There is nothing of interest on the southern part of the ship. A search of both sides of the island that the camps are on will locate some spiky grass, two iron ore veins, one silver ore vein, and one corundum ore vein.