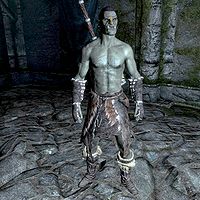 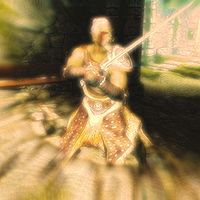 Orcish Invader during the Dreamstride

Orchish Invaders can be found in Nightcaller Temple during the quest Waking Nightmare. Many years ago, an Orc war party invaded the temple seeking revenge on the Vaermina Devotees who were causing the Orcs to be plagued by nightmares. To defend themselves, the priests of Vaermina released a gas called the "Miasma", which put them in a deep sleep and slowed the aging process, lengthening their lives. When you come here during the quest with Erandur, the place is unsealed, the Miasma dissipates, and both the Orcish invaders (first version) and Vaermina devotees awaken. You will have to fight your way through them as you make your way through the library, laboratory, and other areas of the temple.

When you come here during the quest with Erandur, you will have to drink Vaermina's Torpor to enter the "Dreamstride", during which you will encounter the second version of the Orcish invaders.