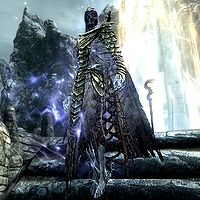 Nahkriin is one of the eight high-ranked dragon priests in Skyrim, and is encountered in Skuldafn, a temple you visit during The World-Eater's Eyrie.

Nahkriin, like the other seven dragon priests, has a mask with considerable power, as it gives 50 more magicka points and a 20% reduction on spell cost for Destruction and Restoration spells.

Nahkriin wields a unique looking staff with a powerful Wall of Storms attack. The staff must be used to open the portal to Sovngarde.

Upon noticing you, Nahkriin will say:

During combat, he will taunt you.