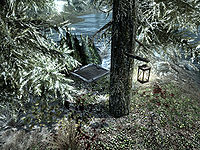 The entrance to Mara's Eye Den

Mara's Eye Den is a small cave found on the middle island of Mara's Eye Pond. Once an underground smuggling hideout, it is now inhabited by two vampires.

Information on the exterior can be found at Mara's Eye Pond. 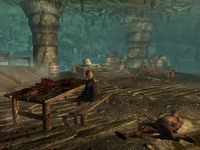 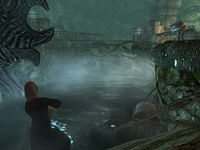 Upon entering you are at the end of a short tunnel that opens out in front of you into a small cave. There are two rock pillars supporting the ceiling and many crates, barrels, and sacks around the cave. You are at the top of the cave with wooden planking around and leading down a ramp to a flooded area at the bottom. On your right are several crates, barrels, sacks and an apprentice-locked chest along the wall and stacked up next to a statue. On the statue is a large coin purse, which can be difficult to pick up.

Around the first pillar are more crates, barrels and sacks and on top of one of these crates is a random potion of healing. Around the far side of the same pillar is an open crate containing two copies of Uncommon Taste, and copies of A Minor Maze, Brief History of the Empire, v1, Killing - Before You're Killed, and the Pickpocket skill book Guide to Better Thieving. There is also a filled common soul gem. Between the two pillars are an open crate containing a skeleton that can be looted and two barrels. There is another barrel by the second pillar, and just around the corner is a slightly raised area with two single beds that can be occupied by the two vampires sleeping. Between the beds is an end table with a random poison and a copy of Immortal Blood, and leaning against one of the beds is a random one-handed weapon, which may be enchanted. 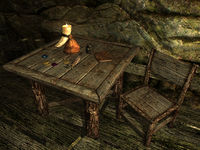 Against the south wall are a small wooden table and two chairs. On the table are a medium coin purse, a sapphire, an amethyst, four loose gold coins, a gold necklace, a gold ring, and a smuggler's journal which describes what took place in this small subterranean sanctuary. Around the cave there are several empty body-shaped boxes, which are probably part of the shipment mentioned in the journal. Quite a few of the barrels contain ingredients. To the southwest against the wall is a campfire with the dead smuggler lying next to it. To the right of the fire are an executioner's block, a woodcutter's axe, and a couple of gory skulls. Nearby are a long table and bench with gory human remains. The vampires can also occasionally be found here, with one of them feasting and the other playing a drum.

Following the ramp down to the flooded area there is an unlocked boss chest on your right, and two large cages are in front of you. The first is empty, but novice-locked, while the second is unlocked and contains the body of a dead Vigilant of Stendarr.