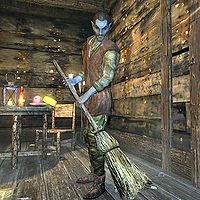 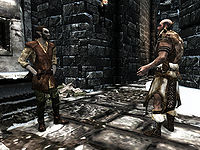 "You're a war hero, Brunwulf. Ulfric will listen to you."

Malthyr Elenil is a Dunmer pawnbroker who lives in the Gray Quarter of Windhelm. He can usually be found in the New Gnisis Cornerclub, where he works for Ambarys Rendar. He is supposed to take over the bar if anything happens to Ambarys, but doesn't due to a bug.

He leads a very simple life in Windhelm. He sleeps on the top floor of the cornerclub every night between midnight and 8am then spends the rest of the day in the taproom, drinking, sweeping, or relaxing. The only exception to this routine occurs when you first enter Windhelm, when he will be engaged in conversation with Brunwulf Free-Winter (see section below).

He wears a set of farm clothes and a pair of boots. He carries an iron dagger and some middle-class items and gold.

Like most of the Dark Elves in town, Malthyr is unhappy with the way he is forced to live.

He will close conversation with:

"It was a pleasure."

However, if you play as a Dunmer, you will receive a bit of fair warning:

"Keep on your guard. This city can be a little rough for those such us."

When asked about his definition of the Gray Quarter, he will explain it to you.

What's the Gray Quarter?
"Windhelm is divided into four quarters. The Gray Quarter is the one that's home to all the city's Dark Elves.
If it looks to you like an impoverished slum, that's because it is. Ulfric prefers that we live in squalor.
He has nothing but disdain for anyone who isn't a Nord. He tolerates us, but that's the extent of his hospitality."

You can also ask him if he's ever thought about moving to Morrowind.

Ever think of moving to Morrowind?
"Not a day goes by that I don't think about returning to the ancestral home of my people.
Still, even with the rough treatment we've had at the hands of Ulfric and his lot, I've got ties here.
It's probably more trouble to pack up and leave than it is to stay. Besides, Ambarys can't run the cornerclub on his own."

If Malthyr has taken over the cornerclub, and you speak to him before Innocence Lost is complete, you can ask him about rumors.

Heard any rumors lately?
"Hear about the little Imperial boy, Aventus Aretino? The stupid whelp is trying to contact the Dark Brotherhood..."

If Windhelm is conquered by the Imperial Legion during the civil war he may greet you a different way. You can also ask him about life under Imperial rule.

"When Ulfric was killed, justice was done. That might sound harsh, but it's how I feel."
Is life better under Imperial rule?
"Yes, markedly so. Ulfric and his Stormcloaks made no secret of their disdain for the Dark Elves.
In fact, they didn't seem to care much for anyone who wasn't a Nord.
The folk of the Empire have always had a more cosmopolitan view of the world, so I'm glad to see them in charge."

When you first explore the Gray Quarter, Malthyr will be engaged in conversation with Brunwulf Free-Winter:

Malthyr: "You're a war hero, Brunwulf. Ulfric will listen to you."
Brunwulf: "It's not that simple. Ulfric wants a Skyrim for the Nords. He doesn't trust what he calls outsiders."
Malthyr: "You've seen how we live -- cramped alleys, run-down buildings, few guard patrols. Even the name 'Gray Quarter' is an insult."
Brunwulf: "I'll speak to Ulfric soon, but I make no promises that I can change his mind."
Malthyr: "That's all I ask. With your help, we have a chance to make a better life for ourselves here. For that, I thank you."