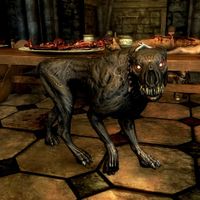 Garmr is one of two death hounds living in Volkihar Keep, along with CuSith. Each can be used as a follower if you join the Volkihar vampires. They function exactly like the other animal followers, having only 'wait' and 'follow' as commands, following the typical behavior of running and attacking things on sight, and are allowed to be recruited in addition to an NPC follower.

When first talked to, the only option available is "Ready for some bloodshed, beast?" Selecting this, you are given the options of "Let's sate our hunger together." (which gains him as a follower) or "Silence, cur. No meat for you today." (which dismisses him). If gained as a follower, you have the option to tell him "Wait here." (which does just that) or "Time for you to head home." (which dismisses him from your service).