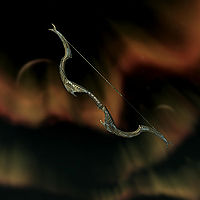 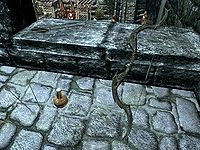 Firiniel's End is an elven bow that is left in a convenient location to perform the assassination of Vittoria Vici during her wedding by Gabriella, as part of Bound Until Death. The bow is enchanted to do twenty points of frost damage upon strike, while also slowing the target by fifty points for three seconds. Tempering Firiniel's End requires an ingot of refined moonstone, as well as the Arcane Blacksmith perk. Any improvements to the weapon from the use of a grindstone are doubled if the Elven Smithing perk is also unlocked.

While preparing for the assassination of Vittoria, speaking to Gabriella will have her reveal to you the location of this bow: "I hope you don't mind, but I took the liberty of surveying the site of the reception. There's a small parapet, just opposite the balcony, that would prove an excellent spot for a long-range kill. I left something there for you. If you're inclined to take that approach." Gabriella was also kind enough to include six arrows and an Elixir of True Shot, to allow for an easier long-ranged kill of the target.