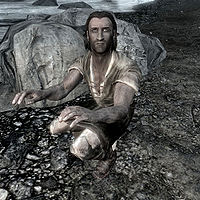 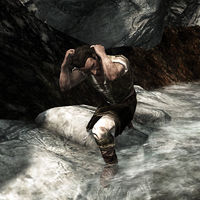 Ennodius Papius, an Imperial, is a former lumberjack now living an isolated existence in a small camp a short distance up the hill from his old workplace, Anga's Mill. He is one of the first assigned targets after joining the Dark Brotherhood. He does not exist prior to the related quest.

He wanders around all day long, at times sitting on a nearby rock, and, if the weather gets tough, warms his hands over the fire. At midnight he crawls into the tent for eight hours of sleep.

He wears a set of farm clothes and a pair of boots. He is equipped with an iron dagger, and carries a selection of lower-class loot and gold.

When handing you the contract on Ennodius' head, Nazir will provide a few facts about the target: "He lives just outside Anga's Mill, in the woods. He was once the miller. Now Papius is just a paranoid recluse who thinks someone is out to get him. And he's right." When you arrive at Anga's Mill, you may overhear a conversation between Ennodius' old colleagues, Kodrir and Leifur:

Leifur: "Whatever happened to Ennodius? He just up and left."
Kodrir: "Don't know why you're asking me. But I'm glad that damn Imperial is gone. Something wrong about him."
Leifur: "You're all heart, Kodrir. I bet Lady Mara is weeping a special tear for you right now."

When you approach the paranoid Imperial at his camp, he will be quite anxious, asking: "Why are you here? Get away from me!"
Three options will be available:

All three options will make him flee with the words: "By the gods! Somebody help me!" When the deed is done, a return to Nazir will make him ask: "How went your meeting with Ennodius Papius? Did you prove his paranoia legitimate?" When you tell him that Ennodius is no more, he will jokingly say: "Good. And I hope you were careful in that lumber mill. Those splinters and rusty nails can be quite nasty."