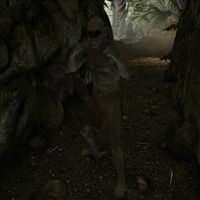 Ash Zombies are Dark Elf victims who have been transformed into disfigured ash creatures by Erden Relvel using the power of the Mask of Dagoth Ur. As part of this transformation, Erden removes the soft tissue of the upper face down to the bone, as Dagoth Ur did. However, Erden goes a step further and the zombies’ lips are ritualistically stitched closed. The zombies have no dialogue as a result.

Ash Zombies are relatively weak enemies, as they only attack with their fists. They can be encountered attacking Ashfall's Tear and guarding Erden Relvel at the Tel Mithryn graveyard, and a group of them can also attack you randomly as a world interaction.

This Skyrim-related article is a stub. You can help by expanding it.
Retrieved from "https://en.uesp.net/w/index.php?title=Skyrim:Ash_Zombie&oldid=2743935"