The UESPWiki – Your source for The Elder Scrolls since 1995
< Skyrim: Items: Unique Items
Jump to: navigation, search 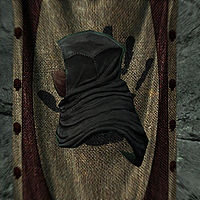 Completing Breaching Security by killing Gaius Maro in a hold capital will result in Gabriella giving you Olava's Token. This token can be given to the eponymous Olava the Feeble, who will read your future. After making some various predictions, she will say: "...Wait! There's something else... A potential for adventure, and wealth. It is a ruin, ripe for the plunder. Deepwood Redoubt. Far to the northwest... Through there is... Hag's End. The last resting place of an assassin of old. A Dark Brother, who bequeaths his ancient earthly possessions... to you." This prediction will add a handle behind the throne in Hag's End, which will open up a wall to the final resting place of the assassin in question, and this equipment set.